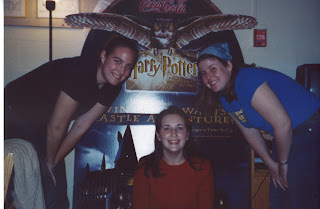 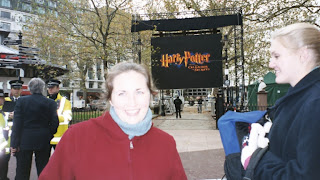 I was driving by myself to meet friends after school one day this week. As I neared a normally-busy intersection, I was startled to realize my car was the only one in sight in all four directions. In the ninety seconds between this stop sign and my arrival at the next intersection – a five points crossroad with traffic lights – I’d convinced myself there was one explanation for why I hadn’t passed a single person or vehicle….

The zombie apocalypse had started.

I locked my car doors, gripped my steering wheel with white knuckles and tried to persuade myself not to run the red light. Peering out my windshield at the sidewalks, I found apocalyptic proof in the windowboxes of mums, the cornstalks tied to porches, and pumpkins on front steps.

By the time I reached the restaurant my breath was coming in hiccups and my pounding pulse had turned my face and neck all sorts of splotchy red. When my friends asked if I was okay, I took a deep breath, looked around at the street – now milling with people pushing strollers and carrying briefcases and shopping bags – and nodded. How could I begin to explain that I’d envisioned zombies overtaking our sleepy town at 4:00 on a sunny Tuesday afternoon?

My imagination is overactive. Like Max’s in Where the Wild Things Are or Harold’s in The Purple Crayon. This isn’t such a bad thing when dreaming of princesses or unicorns, but a mere mention of those things that lurk once the lights go off and they become tangible and terrifying.

I’ve always been this way. My father taught me a passage from Dune while I was in elementary school and each night as I took our dog out before heading up to bed, I’d whisper into the darkness:

I must not fear.
Fear is the mind killer.
Fear is the little death that brings total obliteration.
I will face my fear.
I will permit it to pass over me and through me.
And when it has gone past
I will turn my inner eye to see its path.
Where the fear has gone there will be nothing.
Only I will remain

Halloween is a challenge for children like me. We pick the friendly costumes –- I believe I was a puppy on four separate years. We skirt the houses with spooky décor and haunted music – no candy bar is worth the trauma. We seek out friends who won’t laugh if we scream, or cry, or want to go home early. And despite all of these preparations, there’s always that older kid hiding in the bushes with the bloody mask, or the parent who’s cut a hole in the bottom of the candy bowl, so when you reach in to take a Tootsie Pop, she reaches up and grabs your hand. The bowls I sent flying with candy scattered everywhere, were so not my fault.

Family stories debate whether it was Child’s Play the movie or just a preview I happened across early one morning when I was seven and up too early for my own good. It doesn’t really matter if it was a two-minute ad or the whole film, because the result was the same: my younger brother’s My Buddy doll made me hyperventilate. We had to get rid of it.

In middle school I watched Poltergeist at a Halloween party. I have slept with my closet door shut every single night since then.

For the most part, as long as I avoid scary situations, everything goes well, but some times scary sneaks in. In high school, scary was suddenly “cool.” Despite parental warnings and don’t-you-complain-when-you-can’t-sleep threats, I went with a group of friends to see Scream.

I didn’t complain to my parents, but after they went to bed, I turned on every light in the house and waited for my older sister to come home from her date. Then I begged to sleep on the floor of her room. And whined further until she let me turn her closet light on too – of course the closet door had to be shut.

And scary movie DATES? Disaster. Guys tended to love that I gripped their hands with all the strength in mine. The fact that I flinched against their shoulders, buried my face in their shirts, and shrieked – that was ‘adorable.’

But afterward? Linger in a car for post-movie conversation and kisses? Had they seen the same movie I had? Cars are not monster-proof. And when they walked me to my door, all I could think about was getting safely on the other side of it and throwing the deadbolt. And, if I’m going to admit I’m a wimp to the level of infinity, I might as well confess the ultimate scary movie date blunder.

Um, I bit someone. Not like a vampire. It was just that my hand was being held and I needed it to cover my eyes. My frantic tugging was interpreted a sign to hold my fingers tighter. On the screen a knife had been unsheathed; blood was imminent. I was in a state of panic where words were not an option, and in this state, applying my teeth to the back of his hand seemed completely logical.

There was not a second date.

St. Matt and I have seen one scary movie together. Make that ½ a scary movie. Less than an hour into the film, I decided I’d had enough. I told him I needed a breather, released his hand from my circulation-stopping death grip, and ran for the lobby.

I headed for the cardboard marquis of a Disney movie, planning to stare at cartooned innocence until the credits played. Before I reached it, someone grabbed my arm from behind. I screamed. As every patron in the lobby turned toward the white-face teen in front of The Tigger Movie display, I turned and found St. Matt suppressing a grin.

“You’re scared. Let’s go back to campus,” he said – holding out his hand. How could I not kiss him right there in the lobby? (And marry him four years later).

So, I read scary stories during daylight hours. My jack o’lanterns have smiles. My Halloween decorations are cute instead of creepy. The only Stephen King I’ve read is On Writing and you can cross Zombieland off the list of places you’ll run into me.

If, by some miracle, you manage to drag me to a scary movie someday and I bite you, please keep in mind that this isn’t a sign of the zombie apocalypse. Just let me cover my eyes and no one will get hurt.

Better yet, meet me in the lobby after it’s over. I’ll be the one hiding behind the G-rated marquis and repeating I must not fear in a voice that’s slightly quivery.