So, I tell you we’re having some babies, I accept all of your congratulations, and then I disappear again. Bad Tiffany!

I was actually unplugged and off-grid for a ten days, enjoying a “babymoon” in Italy with St. Matt. And believe it or not, I didn’t go through Petunia-withdrawal or whine about missing my laptop – not even once. *pats self on the back*

And while there are plenty of Italia stories to tell – look! I even included a teaser picture – today all I can think about is names. 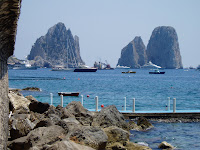 When I’m writing a story I go crazy picking the perfect names for my characters – they have to match temperament, appearance, background, etc. But luckily, I know the character before I know the name and if I need to change it halfway through the book, that’s what the “Find and Replace” command is for.

Not so much for the Schmidtlets in my belly.

And right off the bat, there was going to be none of this “Baby A” and “Baby B” business that the doctors insist on using. We weren’t even in our car, and I certainly hadn’t recovered from the news it was twins, when I was already paling and saying: “Now we need twice as many names.”

But, seeing as we had a good four months before we’d find out gender, interim names were a must. St. Matt suggested Alpha and Beta…

What can I say? He’s an engineer.

I countered with Alcott and Bronte and was resoundingly shot down. Why? Because, as St. Matt so wisely realized, “You’re going to get attached and want to actually name them that.”

He was right. Later that night I woke him up: “Alcott’s kinda cute, isn’t it? For a girl? We could call her Ally for short.”

So you can see why NON-NAME interim names became essential.

After a week of what-about-this? and what-about-that? We settled on two: Acorn, and Bean Sprout. (See how they’re still A and B words… St. Matt is SUCH an engineer).

But now there comes a bigger problem. REAL names…

I have post-its of possibilities everywhere. I’ve just about worn out Baby Name Voyager. In Italy – look, another teaser picture – I stopped St. Matt at every playbill and construction sign so I could read the names of contractors and actors.

He’s learning not to get too attached to any name, because as soon as we find something we both agree on, I change my mind.

I’m learning not to wake him up in the middle of the night when I come up with potentials – because the interrupted-REM answer is always, “No.”

The fact that we’ve got roughly five more months to find the perfect combinations of first and middle names has not prevented me from lying awake and whispering ideas at the ceiling. Or turning to the bookshelf beside my bed and scanning for ideas.

… you know, now that I think about it, Bronte’s kinda cute, too.

Today I’m off to Books of Wonder in NYC to see an amazing *dazzle* of YA authors. (A dazzle is really a group of zebras, but I’ve always wanted to use it in the ‘group’ sense, so we’re pretending it works. Maybe one of them will be wearing black & white? I’ll keep you posted).

Whenever I go to New York, the song from Annie pops into my head (geez, I wonder why?)

NYC, just got here this morning,
2 Friends
5 Authors
1 ME
Oh, NYC, I give you fair warning,
Up front, with squeeing, I’ll be…
I’ve got the last sixth of John Green’s An Abundance of Katherines on my iPod to keep me busy on the train so I don’t drive St.Matt or the-other-Tiffany nuts. And snacks. And books and my writer’s notebook.
But who are we kidding? When I’m this hopped up on excitement, pesting is inevitable.
Don’t worry, Petunia’s coming too, so Tweeting will continue. Pics & updates later.
***Post-Wondervent Update ***
I have photos, stories and wonder… but they’ll have to wait until tomorrow (Blame BEDA, I need 30 days worth of material, people)
Also blame one of the 3 new pairs of shoes I acquired while grocery shopping yesterday. Wearing new shoes to walk around a city is never a smart idea. Wearing new heels while walking around a city is just plain stupid.
I’m putting my stupid feet up and beginning one of my newly signed books.
See you tomorrow….

Sometimes while I’m reading I like to imagine what St. Matt would say if I made him read/ listen to the audiobook. Usually I do this when I’m loving a book I know he wouldn’t enjoy. I give myself an approving pat on the back and think: I’m-such-a-good-wife for not making him read this — even though I really, really want him to.

I thought this while reading and loving The Season by Sarah MacLean. As I smiled like a puggle in a sunbeam and turned delicious pages, I imagined his reaction:

“Um, there’s a lot about dresses in there.”
“Exactly!”
“And dancing.”
“I know!” *dreamy sigh*
“What the heck’s a dance card? These girls have to follow a lot of rules. You, my sweet catastrophe, would not have done well in the 1800’s.” Then, kiss on my forehead, he’d walk away.

As usual, he’d be right. Even in my imaginary conversations, St. Matt’s irritatingly accurate.

I would have been an awful regency lady. Despite my love for all-things-Austen, I’d have failed miserably in her social circle. I’m impulsive. I’m outspoken. I’m entirely too uncoordinated for the quadrille and all the beautiful slippers, gloves and gowns would spontaneously stain and rip under my wear. I’d be scandalous.

On the other hand, the feisty heroines in some of my favorite books made rebelling against 19th century society seem like a recipe for love & happiness. Elizabeth Bennet, Emma Woodhouse, A Great and Terrible Beauty’s Gemma and Felicity, and The Season’s Ella, Vivi, and Alex were more admirable because they refused to conform. They were all impulsive, opinionated, rule-breakers like me.

So maybe I wouldn’t have actually been good at living back then, but – dancing skills aside – I’d make an excellent regency heroine (provided they don’t try and separate me from my Blackberry (Petunia) or yell at me for ripping my gloves).

Now if I can only talk St. Matt into dressing like Gavin…

At the beginning of each year I have my students draw and discuss their favorite place to write. They sketch a comfy chair in a sunny window, a shady hammock in their garden, they draw snacks and pets and squiggly notes to represent music. One girl drew her pink laptop. Pink! I want one – sorry, Huey, if I could trade you in for a pink version of you, you’d be history.

And every year I feel like a bit of a monster as I do this. Because I don’t have comfy chairs or shady hammocks. And while I can sometimes play music to inspire those that like writing to music, and sometimes have silence for those that like that, I’m not allowed to bring in the puggle pair (I’ve asked), and I don’t have pink laptops to give to each of them. (Pink! I wonder if I could paint Huey…)

So essentially I have my students draw their ideal and then respond with a “Too bad. Enjoy your wobbly desk and clicky pencil that ran out of lead.”

I have an ideal writing place: a desk made out of refurbished antique door that’s situated in a giant picture window with an amazing view. It’s got wireless speakers and a printer, and a laptop that could only be more fabulous if it was PINK. There’s a window seat where the puggles wriggle in sunbeams, a wall that’s painted with whiteboard and even a inspirational sign that reads: “And they lived happily ever after” so that I remember how stories should end on the days I want to throw my not-pink laptop through the picture window.

But how often do I have time to take advantage of this writing space? Um, never. My writing is slotted in during fits and spurts. Insomniac attacks and while cooking dinner. Composed while running and typed while trying to watch the weather, carry on a phone conversation, and figure out what Biscotti’s sneaking off to do.

So why do I teach this lesson year after year if I can’t match their drawings of the ideal? For the same reason that I keep writing even when I can’t get to my writing nook to do so. Writing is a part of life – it’s not something that occurs only during a designated timeslot or the magical forces of the universe combine to create perfect conditions.

And one of these days I’ll find the time to clear the laundry and dusty post-its off my writing nook and use it as it’s intended . . . Can’t complain though, because as I type this, watch the Oscars, answer parent e-mails, Twitter, and plan dinners for the week, I’ve also got a warm dozy puggle in my lap, a computer that’s great (even if it’s not pink), and a great soundtrack on I-tunes. Ideal? No. But absolutely satisfying all the same.