Skip to content
Bargaining with babies is hard. I thought the Schmidtlets and I had a deal: no learning to crawl until after I turned in my revision.
The Wild Imp had other ideas. And he is fast.
Baby A isn’t yet crawling, but he’s still mobile: rolling around like a top, scooting backward across the room, and calling: “Mama. MAMA. MAAAAAAMMAAAAA,” if I dare to leave his sight. Better yet, the little wombat would like me to constantly be within reach of his chubby little paws.
Chasing and clutching aren’t the best revision-companions. But that’s what PEI was for. That’s what the hours between bedtime and sunrise are for.
And I finished last Thursday.
Pressed *Send* on the e-mail to my editor – and then, before I could even gulp a panicked breath or sigh in relief:
THUNDER.
POWER LOSS
THE WAILS OF TWO WOKEN NAPPERS
Have I mentioned that one of the major threads in my book is superstition?
My first thought was one very like my main character, Mia, would have had: That was a very bad sign.
Later, after the twins had been soothed, the power restored, and my confidence petted by some Twitter support, I revised my thinking: That was a very good sign – if the power had gone out even a minute sooner, I would’ve been prevented from sending.
And we all know how little I like to wait.
Apparently the Schmidtlets have inherited that trait from me: The Imp is extremely IMPatient, and Baby A is currently calling my name.
Maybe we’ll strike a new bargain: Ten more minutes of naptime in exchange for peaches at every meal.
*goes to buy peaches in bulk*
There are a few awesome things on my desk right now.
1)   My Edit Letter! I think this makes it official. Well, MORE official. It also makes my head spin in the very best of ways.
2)   A bag of Revision Skittles  – No, I’m not sharing. I NEED these.
3)   This fabulous Revision Skittle boombox. 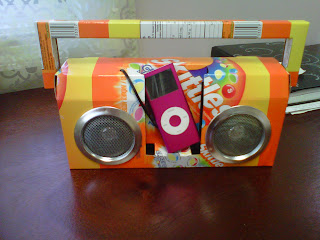 And this could be yours. Well, not this one, it’s mine.  But there’s another one downstairs still in its box that could have your name on it.
Music plays a large part in Send Me A Sign, and Revision Skittles played a large part in my writing of it – it seems only fitting that I should pair the two and give one of these away.
The boombox is made by Terracycle  – and this is their description:
“Groove greener with this portable boombox made with up to 80% recycled materials. With its 3.5mm universal plug for you can play music from your iPod, iPhone, MP3 player, laptop, or computer. Batteries not required.”
To enter – leave a comment below where you list YOUR favorite candy.
I leave tomorrow at early o’clock for the Goldblatt Agency retreat – aka Camp Barry – and let’s just say that I’m having some major separation-from-Schmidtlet anxiety. Cheer me up by entering.
I’ll leave the contest open until I get back and will draw a winner on Monday.
Good luck and stay sweet!