So, I have haircut issues. I have other issues, too, but today’s post is about my haircuts.

I don’t like them. I mean, I like them fine when I’m the one getting my haircut.  Other people? Sure, cut it off, perm it up, straighten, highlight, dye it stripey, shave in swoops.
I guess I should clarify, I have St. Matt Haircut Issues.
This is not a new thing. It harkens back to the first summer we were dating, when he’d gotten a haircut before coming to visit me in MA. Only, he didn’t warn me first.
I should clarify some more. St. Matt only really has three hairstyles:
Okay, back to summer 2000.
So, this boy shows up on my parents’ doorstep and wants to hug and kiss me. Granted I’m loopy on pain meds because I just had ankle surgery, but I nearly fall off my crutches trying to back away from him. *Stranger Danger!* Where was my curly-headed boyfriend? Who was this guy with ears?
This is where the haircut issues originated.  They haven’t abated. Since then we’ve come up with a coping method: I require multiple reminders of any forthcoming haircuts; I’m also allowed a moment to *absorb* my husband’s new appearance before he approaches.
And he doesn’t take it personally when my reaction is always, “I’m not quite sure I like it.”
Friday was haircut day. I walked in the house and he did the required *freeze in place* so I could examine and adjust.
And since he knows my haircut history and has only ever had the three hairstyles, he took it in stride when I said, “I don’t know, you look different.”
“I’m still me.” This was offered with a Saintly grin and arms extended for a hug.
“No, something’s different. It’s not right.” I continued to circle him.
Saintly sigh. “You always say that. Wait until tomorrow when I shower and style it. It’s fine.”
I gave him a wary nod of agreement and tried my best not to study him all night.
Saturday morning things did not look “fine.” They were still different.
“What did you tell the barber?”
St. Matt frowned at the mirror; even he could see something wasn’t quite right. “I said, The usual. Short on the sides, longer on top.”
It is short on the sides and longer on top. That much I have to agree with. But, the sides are shorter than usual short. The top is longer than usual long. And the sides climb higher on his head than normal. They climb SO high that they’re invading the top’s territory.
This is when we realized the truth about his haircut: it’s an Accidental Mohawk. 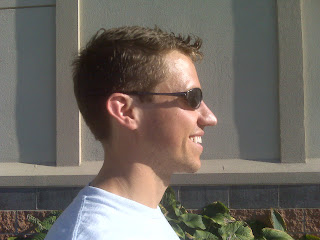 Since reaching this epiphany, I haven’t even attempted to hide my glee.
First, the sight of a mohawked St. Matt is enough to reduce me to instant gigglefits.
Second, I know someone who’ll be reluctant to head back to the barber anytime soon.
Say hello to a curl-headed winter!